The first definitive monograph on the influential Australian modernist sculptor, Vincas Jomantas (1922-2001) will be launched at RMIT Gallery on 31 May as part of the exhibition, Chaos & Order 120 Years of Collecting at RMIT.

Vincas Jomantas (The Beagle Press)  is co-authored by Robert Lindsay and Ken Scarlett, both of whom have life-long experience in curating and writing about Australian sculpture. The book also involves contributions by Jane Eckett, as well personal insights into the life of the artist through interviews with Jomantas’ wife, Laima.

The book’s stunning photography illustrates the sheer scale and development of Jomantas’ practice, from his well-known sculptures, to his late forays into painting.

Jomantas’ work features in Chaos & Order along with RMIT alumnus Leonard French. In the book, Lindsay details how between 1963 and 1965 Jomantas shared a studio with French in a factory in Cheltenham. French’s career as an artist had started when he was encouraged by sculptor and RMIT lecturer Victor Greenhalgh (1900-83) to abandon a sign writing apprenticeship and take up art at RMIT, and it was Greenhalgh who later offered Jomantas a lectureship at RMIT in 1961. 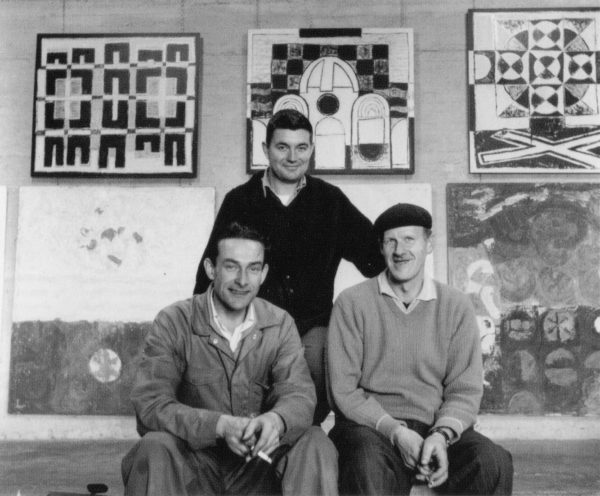 Pictured: (left) Vincas Jomantas, Leonard French (standing) and artist Les Hawkins in the studio at Cheltenham, 1963.  Hawkins was French’s assistant on the construction of the National Gallery of Victoria Great Hall stained glass ceiling. Photo courtesy of the authors of Vincas Jomantas (The Beagle Press).

Lindsay said Jomantas had a significant influence at RMIT (1961 to 1987), as an ‘instructor in sculpture’, then a Senior Lecturer in Sculpture, and eventually Head of Sculpture at RMIT.

Lindsay believes that in order to understand Jomantas’ sculptures, it is important to acknowledge his European cultural heritage. Born in Lithuania, Jomantas was fortunate enough to be part of a cultured family, his home frequented by writers, musicians, actors and artists. His father was also Vilnius Jomantas (1891-1960), a famous graphic artist and lithographer.

However, while attending art school in the capital of Vilnius, Jomantas’ path to be an artist was disrupted by the advancing Soviet Army in 1944. Escaping with a bullet wound to his leg, he joined the refugee community of displaced Europeans in Munich.

Providence struck after the Second World War, when Jomantas was resettled in Australia under a post-war resettlement scheme, which Lindsay emphasised was part of a migration program ‘motivated by the Australian Labour Party’s rally cry after WWII that Australia must ‘populate or perish.’

“Australia was also the farthest place Jomantas could go to escape the horrors of Soviet Russia”, Lindsay says.

However, Jomantas’ Lithuanian roots would always remain a constant in his life, finding their expression in the iconography of his abstract sculptures.

“Lithuania is a highly wooded and agrarian culture, and one of the last countries in Europe to convert to Christianity,” Lindsay explains.

“Because of its long history of struggle for survival and independence Lithuanians have maintained a deep appreciation for Pagan Pantheism through folk art as a way of asserting their national identity.”

These fairy tales and legends, brimming in Vincas’ childhood imagination, later emerged in the form of 20th-century modernist abstraction.

These feelings and attitudes towards Lithuanian folklore emanate in the The King 1972. A posthumous cast of the bronze sculpture The King II, 2014 is the first work you see as you enter the Chaos & Order exhibition. The work was acquired by the RMIT Art Fund in 2013, and is part of the RMIT University Art Collection. 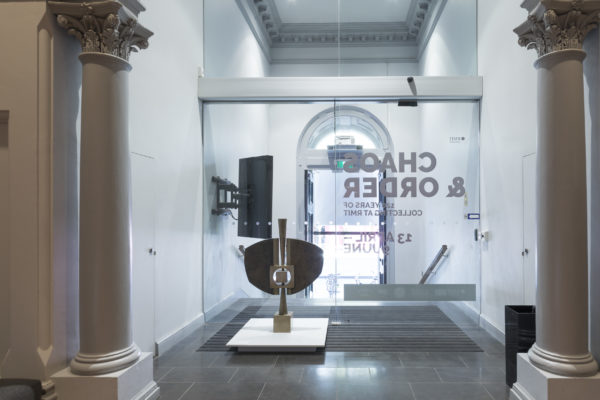 Vincas Jomantas’ work The King II, 2014  in the RMIT Gallery exhibition Chaos and Order, 120 years of collecting at RMIT. Photo by Mark Ashkanasy, 2018.

“The King is an heraldic figure representing both the spiritual and the physical,” Lindsay said. “This gateway from the physical into the ethereal rests at the pinpoint between two conical shapes – one coming down and the other directed towards heaven.”

Obscuring our access to this spiritual dimension is a box in the middle, “so the point where we move from the spiritual to physical is contained within our imagination.”

Lindsay remarks admiringly, “‘Vincent’ never sought commercial success – he made works for an intellectual and spiritual reward for himself.”

Despite these personal allusions to his own cultural heritage, Lindsay stressed that Jomantas’ work was “always in the vocabulary of contemporary sculpture, and that’s what makes him an interesting artist. The two elements co-exist in that they actually order each other. It isn’t shallow in the sense of pure formalism.”

The influence of international art was also significant to RMIT. When Jomantas joined the RMIT art department it was known as the ‘foreign legion’ because most of the lecturers were from overseas. Jomantas and Teisutis Zikaras from Lithuania; there was Herman Hohaus and Inge King from Germany; and Ernesto Mungo (1931-2003) from Italy. The only Australian-born lecturer was Lenton Parr, who was the Head of Art School.

According to Lindsay, Jomantas’ influence on his students at RMIT cannot be seen directly – what he produced were ‘thinking’ artists, fostering the idea of experimentation, pushing yourself and being professional and working hard.

“His whole approach was about trying to get his students at RMIT to do their own thing. It was a tutorial studio practice. A criticism of art schools is that some lecturers will produce clones of themselves – he didn’t do that.

“Some of the artists that he has influenced, like well known sculptor Geoffrey Bartlett, have gone on to do their own thing.”

For Lindsay, Jomantas’ teaching influence was his attitude, which “finds expression from the individual talking with their personality and the time and the vocabulary.”

Lindsay quotes a lovely line by T.S. Elliott to summarise this: ‘For last year’s words belong to last year’s language. And next year’s words await another voice.’ Jomantas wanted other artists to find their own voice and to tap into their zeitgeist.

Calum Alexander completed an internship at RMIT Gallery and is finishing the final semester of his Master of Media at RMIT.

Note: The Lithuanian folksinging group The Lost Clog (featuring printmaker Jazmina Cininas) will give a short performance at the launch.

Chaos & Order celebrates over 80 Australian and international artists in an ambitious survey of the RMIT Art Collection. Join us at the opening...