Photographic artist and RMIT alumnus Polixeni Papapetrou passed away recently after a long illness. She was only 57 years old, and remembered as being both an exceptional artist and a wonderful advocate for photography in Australia.

A headline artist in RMIT Gallery’s current exhibition Chaos & Order: 120 years of collecting at RMIT  her work Study for Hattah Man and Hattah Woman, 2012 (pictured below) is placed next to Charles Wheeler’s 1937 Blue and Gold, in an exhibition that encourages audiences to engage with the artworks through a broad set themes and overlapping categories.

Last year Papapetrou, who completed her Master of Arts at RMIT in 1996, was awarded one of Australia’s most prestigious photographic awards, the $30,000 William and Winifred Bowness Photography Prize.

In his Chaos & Order opening address Mr Terry Wu, a passionate art patron & collector, made a special mention of the photographer’s work and life.

‘As well as a wonderful artist, Poli was an inspirational woman and mother…my deepest condolences to Robert, Olympia and Soloman. May Poli rest in peace.’

Associate Professor Shane Hulbert, Associate Dean Photography, said Papapetrou was one of RMIT’s key photographic alumnus. Two of her large photos (main picture above) Witness, 2006 and She saw 2 girls and a boy 2006 (pigment inkjet prints) from the Haunted country series 2006 (in the National Gallery of Victoria collection), featured in Hulbert’s 2017 exhibition Photography 130 at RMIT Gallery. Her muse and daughter Olympia Nelson, the subject of many of her photos over the years, posed in front of the younger version of herself in She saw 2 girls and a boy at the exhibition opening. 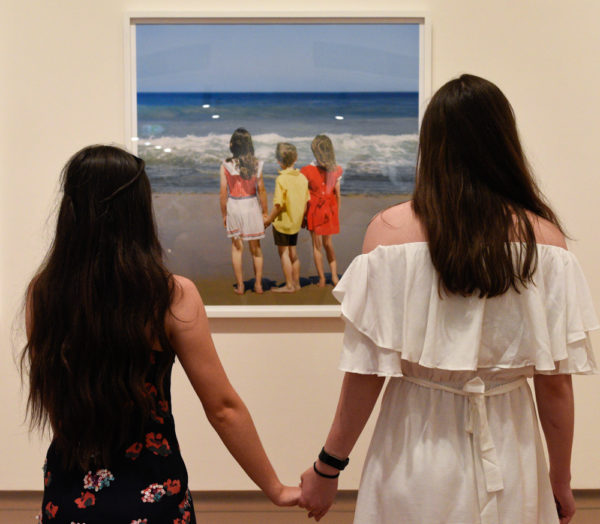 ‘Poli’s contribution lives on not only through her work, but also through the legacy of support she provided for artists, institutions and the education of photography,’ Hulbert said.

‘She will be remembered  not only for the challenging, engaging and global success of her work, but also through her contribution to photography in Australia, and her endless support of the arts.’

The artist’s works were shown in several RMIT Gallery exhibitions, including Living Elvis in 2007, which featured several photographs from her series Elvis Immortal, made between 1985 to 2002, documenting the cult of Elvis in Melbourne.

As Wu noted, the greatest strength of the university’s art collection is its investment in students and staff and the creation of a living archive of the University’s endeavours.

Chaos & Order celebrates over 80 Australian and international artists in an ambitious survey of the RMIT Art Collection. Join us at the opening…