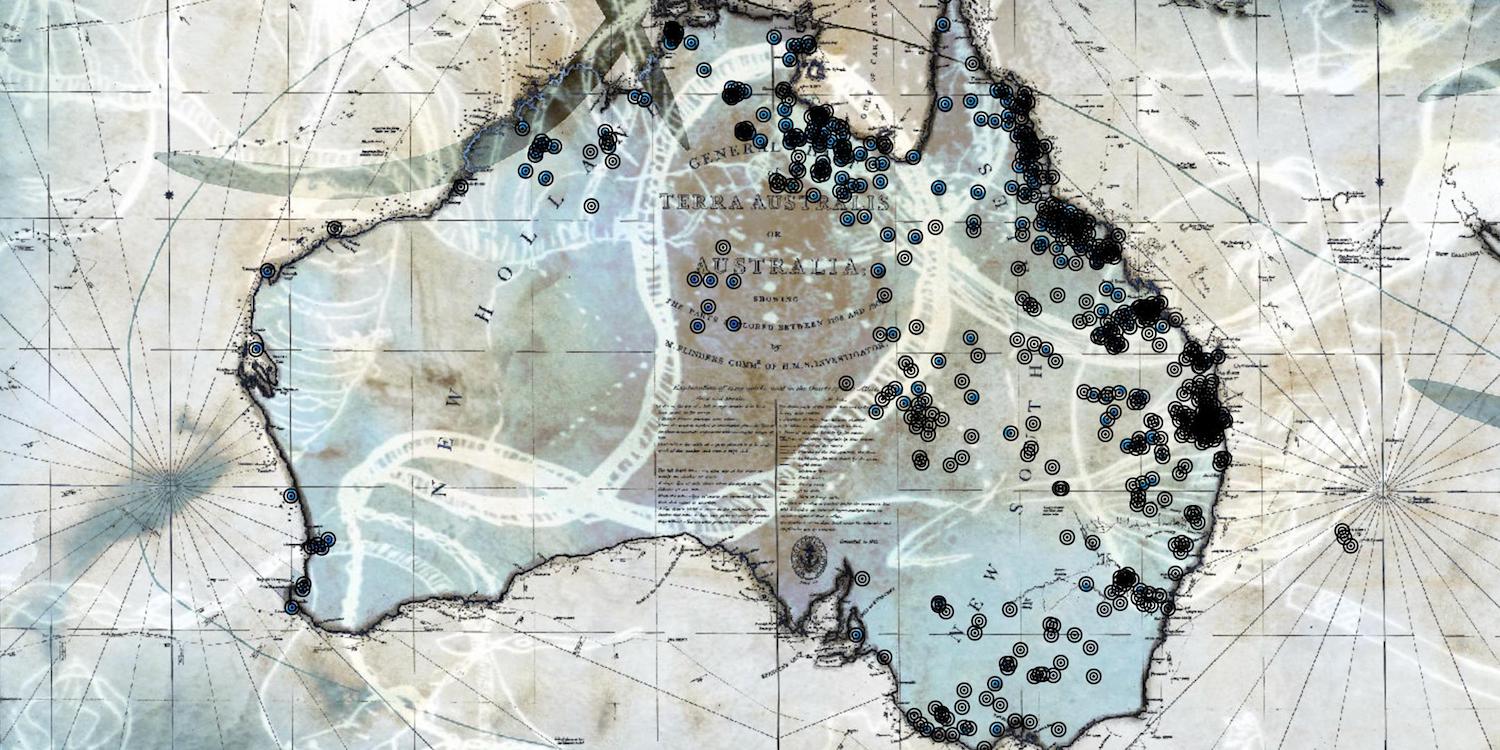 The names of places: a conversation with Judy Watson

The Ngarara Willim Centre and RMIT Gallery are holding a round table discussion on Thursday, 19 April on Indigenous representation in the RMIT Art Collection. This free public event is part of the RMIT survey exhibition Chaos & Order: 120 years of collecting at RMIT.

The RMIT Art Collection includes more than 80 works by Indigenous artists – a selection of which will be presented in Chaos & Order. This discussion presents an important opportunity to talk about how community can have a more direct role in determining the nature and use of Indigenous works in the collection, whether the collection should pull focus on local Indigenous artists, and how we can promote engagement. 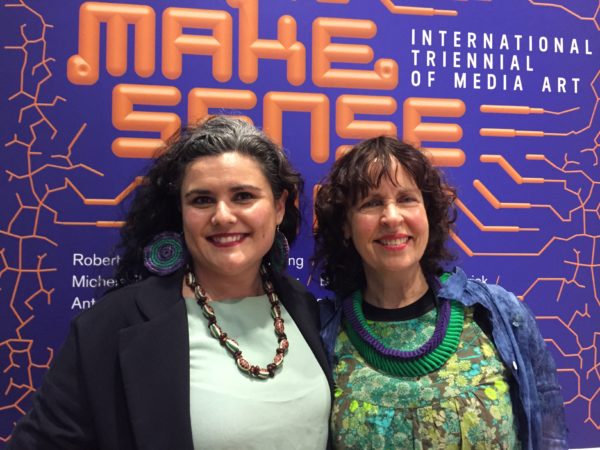 As part of the 2017 exhibition ‘Experimenta Make Sense’, RMIT Gallery was honored to have indigenous artist Judy Watson delivering a talk regarding her project ‘the names of places’. Joining this discussion was Paola Balla, an artist, curator, writer and lecturer at Moondani Balluk Indigenous Academic Centre, Victoria University.

Judy Watson’s Aboriginal matrilineal family was from the Waanyi country in North West Queensland. Her works revealed indigenous histories following lines of emotional and physical topography that centre on particular places and moments in time. Paula Bella, a Wemba-Wemba and Gunditjmara woman, is an indigenous artist with a strong understanding of the Australian history and contemporary contexts. Together, the two women took the audience through historical stories of Aboriginals and Torres Strait Islands people, which was the center to Watson’s project featured in the RMIT Gallery exhibition.

As Aboriginal and Torres Strait Islander women, we are very proud. I deeply respect Judy for her sense of dignity and the respect and pride that she brings to her work, in a way that is gifted to all of us. To myself, that is incredibly motivating.

For a lot of people, these are new stories, things that are unknown to non-Aboriginal people. I would like to start with the notion ‘history lies within’ that is prominent in the names of places.

It could be interpreted as our history lies within us. My mother’s cousin, Shirley Macnamara, once told me this story of how my Great Great Grandmother, Rosie, escaped a massacre on Lawn Hill. That is when it came to me that we are survivors, we are here because our ancestors have survived. The history lies within us.

As Aboriginal women, that legacy and the trace of trauma is left within us. It is not something that you can remove but something you have to deal with. The challenge is how do we heal and thrive, when we are still experiencing trauma.

Within the website project, the names of places, you are inviting contributions from the public. Why did you make that decision to open to the public to contribute their knowledge, stories and research about the massacre sites?

I think it is part of all our history that we all need to know and learn more about, and then pass on to our people. I think it is a platform that everyone can contribute to, could very much be through hearsay. Someone might have heard something through their family or elsewhere. It may not be verified but it’s okay. You can simply send your stories to this email address contribute@thenamesofplaces.com. Those stories that come in can then go through a filtering process of historians, who would seek verification for them.

It might be traumatic for people to know that there could be a massacre happened literally in their backyard. It is the things you can see on the digital map, a list of names of massacre sites. Also, on the map, you can see those little blue lines, which indicate waterways. A lot of massacres happened near water, I thought it is an interesting thing.

There are horrific stories about these massacres taking place near water told in a number of outstanding exhibitions. I believe in the power of art, artists and curators to present those stories to the public. The trauma becomes a burden and people are exhausted by carrying them. Not just us Aboriginal, sometimes, non-Aboriginals have stories to tell. I also have a story, which based in a town called Echuca in Yorta Yorta country. My aunty used to live there, where she met a farmer she knew from high school. He told her this story about witnessing a man smashing bones and skull fragments with an axe, which they both knew was aboriginal remains. The farmer was shock and asked the man about his action but he just laughed it away. Such stories are so tragically common!

What would you say, Judy, to people who are afraid? Because we often see fear as an inhibiting factor in non-aboriginal Australians for talking about things, for talking about the truth of country and the blood in the ground. What do you say to them?

That is the duality of our histories and this is one way of contributing to it. I remember at Moree Gallery, the curator at that time put a callout to farmers and anybody in the community, saying that the gallery could become a repository for stone tools. All of this stuff started coming in. If there is a keeping place, where things can have dignity and be respected, then that is where this can come. It takes that first step to then think “I know this story. I don’t know if it’s true but I’ve heard about it. It’s haunting me.”

I think it is very important to talk about the sense of haunting and spirit. Sometimes the spirit and spirituality might be seen as silliness, something you can’t believe in. But, the sense of haunting is so real that we are struggling with it all the time. We are often accused of being stuck in the past as indigenous people, but I actually think we are very future focused people. That is what survival gives you.

I would love to hear more about your matriarchs and how they affect your work, and how they strengthen you whilst you do this work, because I imagine that it is emotionally draining for you as well?

We were talking about the haunting and there are living presences. My great great grandmother, Rosie, when she escaped from the massacre, she was bayoneted. That wound on the upper part of her body, she carried for the rest of her life. When I made ‘Salt in the Wound’ in 2007, it was very much that shape. It is the open wound with the salt in it, which come down to generations. A trans-generational trauma throughout history and our families. There are other tragical stories which my nan used to tell me, very traumatic for a little kid. Stories about people with incredible lives.

My grandmother was a domestic helper for white women in Echuca. She ran the household and looked after babies, but had to eat her food on the back step of the kitchen. She wasn’t allowed to eat in the kitchen. When she gave birth to her children in the hospital, in the 1950s, she had to do it on the veranda where stayed white women with mental health issues, due to the segregation laws at the time.

I went on this event of Myall Creek Massacre Memorial event and walk. It is where the survivors of both the perpetrators and the survivors come together every year. They get up and speak and you walk up to the site. One of the local indigenous artist created this beautiful site to walk along. Local schools were brought in. This could be happening all throughout Australia.

Experimenta Make Sense investigates how artists ‘make sense’ of our world, inviting us to explore our understanding of the present. Michele Barker...

Chaos & Order celebrates over 80 Australian and international artists in an ambitious survey of the RMIT Art Collection. Join us at the opening...

Wominjeka, Join us at a round table discussion on Indigenous...